OUTLINE OF THE TALK
1. What are Runes? - Alphabets of the ancient Germanic peoples.  Angular for easier carving in stone and, particularly, wood. No horizontal lines for carving across wood grain.

a. Elder Futhark - named after the first six runes, 50 CE to 800 CE. Oldest is the Meldorf brooch dated approximately 50 CE. By 250 CE inscriptions are found all over the Germanic world. About 300 inscriptions survive, undoubtedly because the vast majority were carved on perishable material, typically wood or bone. Most of the oldest are in metal, some quite elaborate.

b. Anglo-Frisian Futhorc - I'm not that familiar with it so I'm not going to talk about it.

c. English Futhorc - only one English Futhorc inscription survives intact, though the Old English Rune Poem elaborates on all the Futhorc. 28 or 33 staves depending on source.  OERP - 28.

d. Younger Futhark - Viking age Scandinavian alphabet evolved from the Elder. Some of the later stave forms were in use by 600 CE. "..by 800 CE the new, systematically formed Younger Futhark, reduced from twenty four to sixteen staves, had been completed, institutionalized, and disseminated  throughout all the Scandinavian lands." (Thorsson, Runelore, p30.) Thorson believes that the change from twenty four to sixteen, happening at the same time the language was becoming more complex in sounds, is evidence "that the reformation took place for extralinguistic, magico-religious reasons" as this is unheard of elsewhere in orthography. (Runelore, p31)  Well, maybe.

e. 800 CE closely matches the beginning of the Viking age, which started in 793 with the raid on Lindisfarne. (Background.)

f. Most modern Runic magicians use the Elder Futhark, or more rarely the Armanan.

a. Originally, for mundane writing.

b. For magic - supported by multiple existing runic inscriptions that make no sense as writing, but do as talismans, charms, blessings etc. Some people particularly mainline scholars and some in the more religiously conservative Heathen community, claim the runes were solely used for writing and not for magick. This is refuted by the existence of multiple inscriptions which make no sense as literal script, but do from a talismanic magical perspective. It is also refuted by the tales of the magical uses of runes in the Sagas, the most famous being Egil's Saga. (Read from Runelore, pp 80-81, poison prevention, healing the sick, cursing with niding pole.)

c. For divination - no real historic evidence of runes used for divination, but Tacitus (Germania, 98 CE) mentions carving of "certain signs." (Runelore, p 78)  Regardless, they work. They work best when read in a "Germanic worldview."  Nine worlds etc.

a. For divination - multiple books, some good, some less so. Specifically avoid Ralph Bloom who puts the runes in an entirely different, non traditional order and admits he made the whole book up.  Also - blank rune is a modern concept and has no real place in traditional rune lore.

c. For operative magick:
a. Bind runes or Rune scripts as sigils or talismans
b. As visualized forces (intoned too if possible)
c. Eucharistically
d. Any place you would use a magical alphabet.

6. Contact me for bibliography, recommendations etc. if interested, also if interested in a runic study group or esoteric heathenry as a group may be re-forming soon in the Atlanta area.


from Wikipedia -
"The three best-known runic alphabets are the Elder Futhark (around 150–800 AD), the Anglo-Saxon Futhorc (400–1100 AD), and theYounger Futhark (800–1100 AD). The Younger Futhark is divided further into the long-branch runes (also called Danish, although they were also used in Norway and Sweden); short-branch or Rök runes (also calledSwedish-Norwegian, although they were also used in Denmark); and thestavlösa or Hälsinge runes (staveless runes). The Younger Futhark developed further into the Marcomannic runes, the Medieval runes(1100–1500 AD), and the Dalecarlian runes (around 1500–1800 AD)."

[Editor's Note - The editor does not confirm that the panting you hear in the background is the Fenris Wolf.But, then again, who can say?] 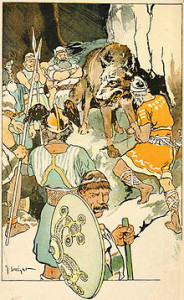