The weather still a bit nippy, free illuminsts from various local and non-local bodies assembled at consecration rock on March 29, 2014. Well attemded for the time of year, we did our traditional Workings, consecration, points chauds, healing circle and a homily from our early days many years ago:
RITUAL OF ORDINATION & CONSECRATION, ARABIA MOUNTAIN 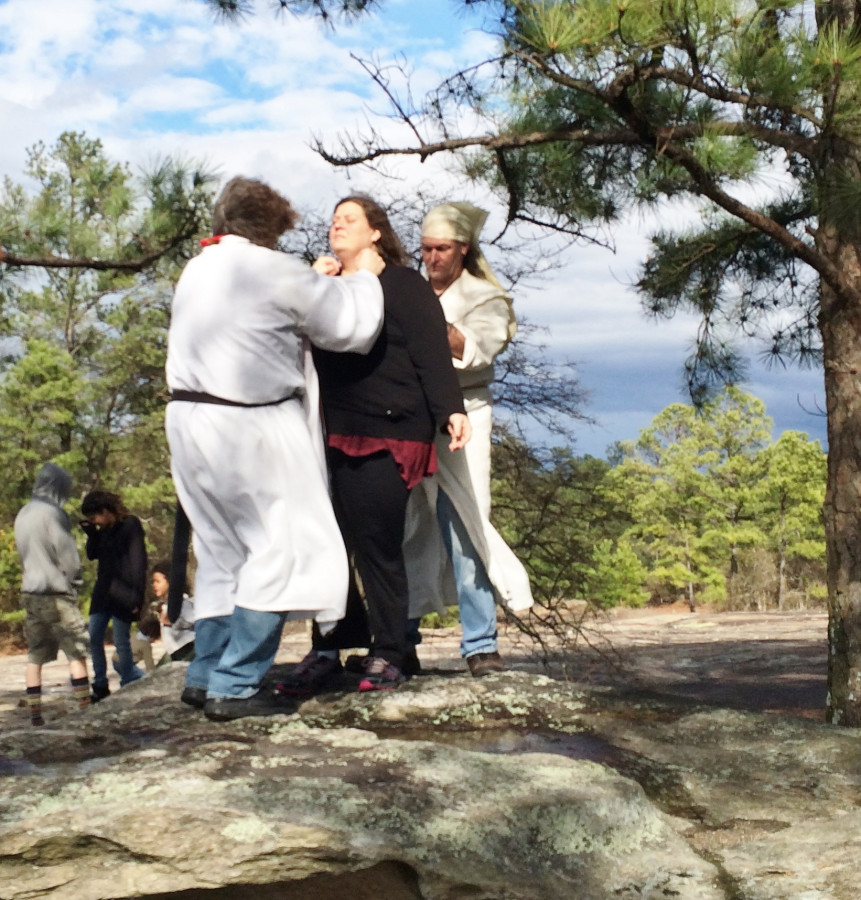 [Three Consecrated Bishops for Consecration; One Bishop for ordination.]
Principle Officiant - In biblical times the laying on of hands was an action which conferred blessing or authority. To wit, Isaac blessed his son Jacob by laying hands (Genesis 27), and Aaron and the High Priests who succeeded him transferred the sins of the Children of Israel to a sacrificial goat (Leviticus 16:21). Finally, in the Old Testament priests were ordained by the laying on of hands...The Orthodox also use laying on of hands for the ordination (called Cheirotonia) of the higher clergy (bishops, priests and deacons) which is distinguished from the blessing (called Cheirothesia) of the lower clergy (taper bearers, readers and subdeacons). Priests and deacons receive the laying on of hands by a single bishop, bishops are consecrated by three or more bishops...A Cathar Perfect, the highest initiate in the Cathar hierarchy after spending time as a Listener and then Believer, had to undergo a rigorous training of three years before being inducted as a member of the spirtual elite of the now defunct religious movement. This took place during a ceremony in which various Scriptural extracts were quoted, including, most particularly, the opening verses of the Gospel of John. The ceremony was completed by a ritual laying on of hands as the candidate vowed to abjure the world and accept the Holy Spirit... 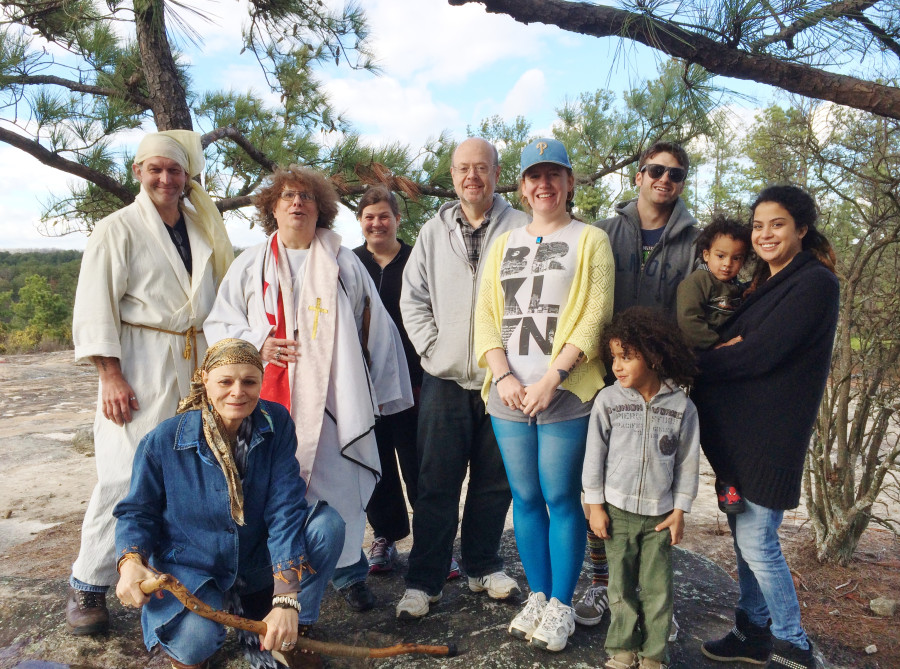 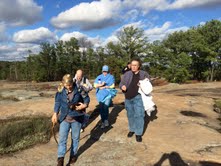 Numerous persons received points chauds from some of the bishops present.

We then held our enthusiastic healing circle on Consecration Rock, and adjourned to the Nature Center about a mile away to toast and hail the new bishops. 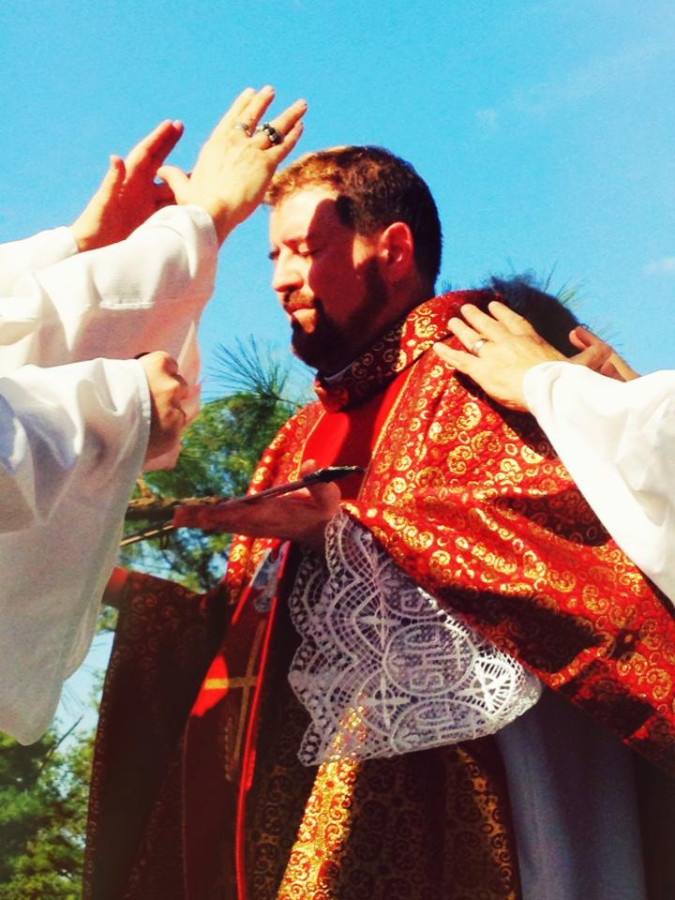 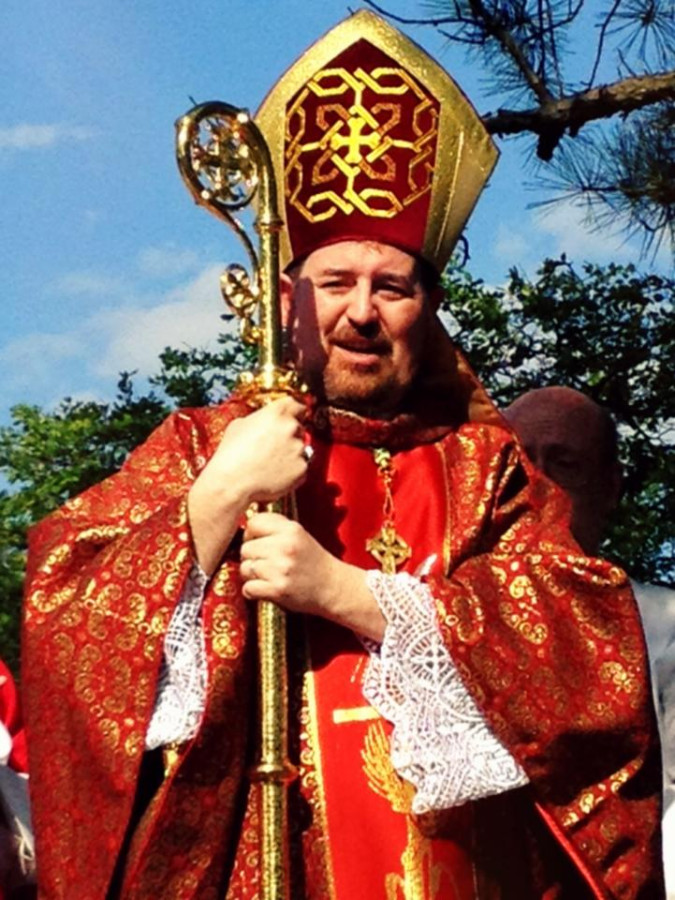 CEREMONY USED IN  CONSECRATION with notes

I was sent forth from the power,

and I have come to those who reflect upon me,

and I have been found among those who seek after me.

Look upon me, you who reflect upon me,

and you hearers, hear me.

You who are waiting for me, take me to yourselves.

And do not banish me from your sight.

And do not make your voice hate me, nor your hearing.

Do not be ignorant of me anywhere or any time. Be on your guard!

Do not be ignorant of me.

For I am the one who alone exists,

and I have no one who will judge me.

For many are the pleasant forms which exist in numerous sins,

which (men) embrace until they become sober

and go up to their resting place.

And they will find me there,

and they will live,

and they will not die again.

Here then is Wisdom, the Sofia, the CHAHVEMOHT

1Does not (A)wisdom call,
And understanding lift up her voice?
2On top of (B)the heights beside the way,
Where the paths meet, she takes her stand;
3Beside the (C)gates, at the opening to the city,
At the entrance of the doors, she cries out:
4"To you, O men, I call,
And my voice is to the sons of men.
5"O (D)naive ones, understand prudence;
And, O (E)fools, understand wisdom.
6"Listen, for I will speak (F)noble things;
And the opening of my lips will reveal (G)right things.
7"For my (H)mouth will utter truth;
And wickedness is an abomination to my lips.
8"All the utterances of my mouth are in righteousness;
There is nothing (I)crooked or perverted in them.
9"They are all (J)straightforward to him who understands,
And right to those who (K)find knowledge.
10"Take my (L)instruction and not silver,
And knowledge rather than choicest gold.
11"For wisdom is (M)better than jewels;
And (N)all desirable things cannot compare with her.
12"I, wisdom, (O)dwell with prudence,
And I find (P)knowledge and discretion.
13"The (Q)fear of the LORD is to hate evil;
(R)Pride and arrogance and (S)the evil way
And the (T)perverted mouth, I hate.
14"(U)Counsel is mine and (V)sound wisdom;
I am understanding, (W)power is mine.
15"By me (X)kings reign,
And rulers decree justice.
16"By me princes rule, and nobles,
All who judge rightly.
17"I (Y)love those who love me;
And (Z)those who diligently seek me will find me.
18"(AA)Riches and honor are with me,
Enduring (AB)wealth and righteousness.
19"My fruit is (AC)better than gold, even pure gold,
And my yield better than (AD)choicest silver.
20"I walk in the way of righteousness,
In the midst of the paths of justice,
21To endow those who love me with wealth,
That I may (AE)fill their treasuries.
22"The LORD possessed me (AF)at the beginning of His way,
Before His works of old.
23"From everlasting I was (AG)established,
From the beginning, (AH)from the earliest times of the earth.
24"When there were no (AI)depths I was brought forth,
When there were no springs abounding with water.
25"(AJ)Before the mountains were settled,
Before the hills I was brought forth;
26While He had not yet made the earth and the fields,
Nor the first dust of the world.
27"When He (AK)established the heavens, I was there,
When (AL)He inscribed a circle on the face of the deep,
28When He made firm the skies above,
When the springs of the deep became fixed,
29When (AM)He set for the sea its boundary
So that the water would not transgress His command,
When He marked out (AN)the foundations of the earth;
30Then (AO)I was beside Him, as a master workman;
And I was daily His delight,
Rejoicing always before Him,
31Rejoicing in the world, His earth,
And having (AP)my delight in the sons of men.
32"Now therefore, O sons, (AQ)listen to me,
For (AR)blessed are they who keep my ways.
33"(AS)Heed instruction and be wise,
And do not neglect it.
34"(AT)Blessed is the man who listens to me,
Watching daily at my gates,
Waiting at my doorposts.
35"For (AU)he who finds me finds life
And (AV)obtains favor from the LORD.
36"But he who sins against me (AW)injures himself;
All those who (AX)hate me (AY)love death."

BLESSING OF THE KOHENIM ( Consecrator)

May the LORD lift up his light unto you, and grant you peace.

[Pause] Do You Will to Accept Consecration in the Gnostic and Apostolic Lineages Passing through Us from the Dawn of the World?

[On Affirmation]  By the Power Vested in Us from our predecessors in the Most Antient Egregore of Spiritual Power, I Consecrate You

EPISKOPUS forever in the Succession Apostolic and Gnostic.

HYMN OF THE ATEN (2nd Co-consecrator) 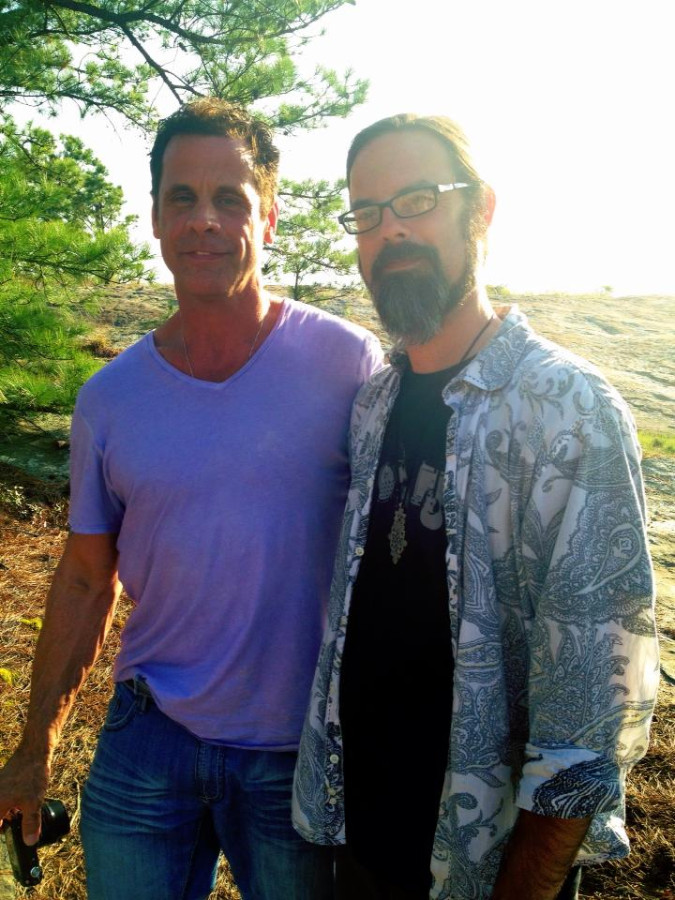 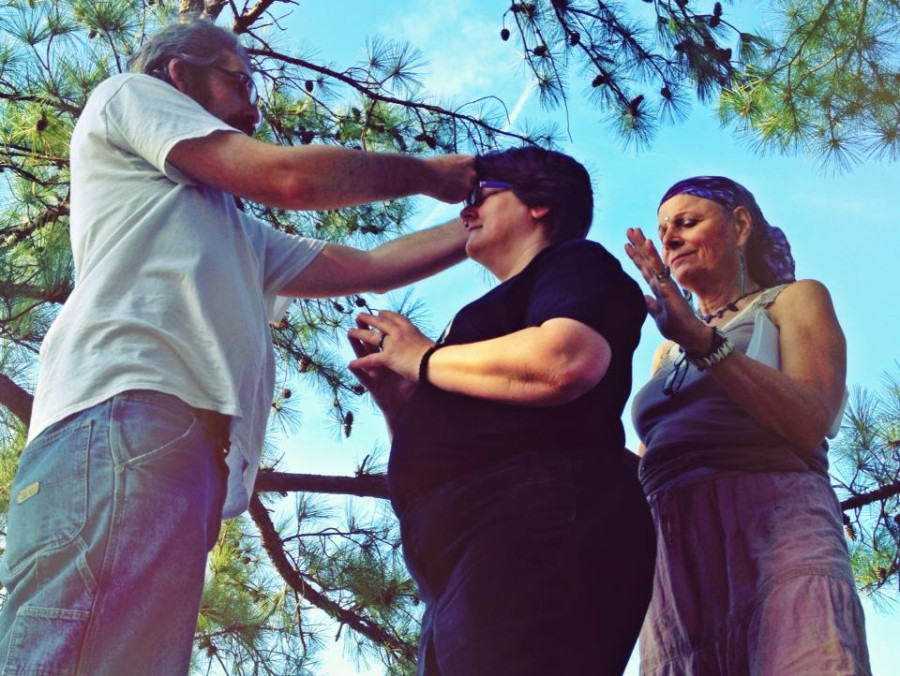 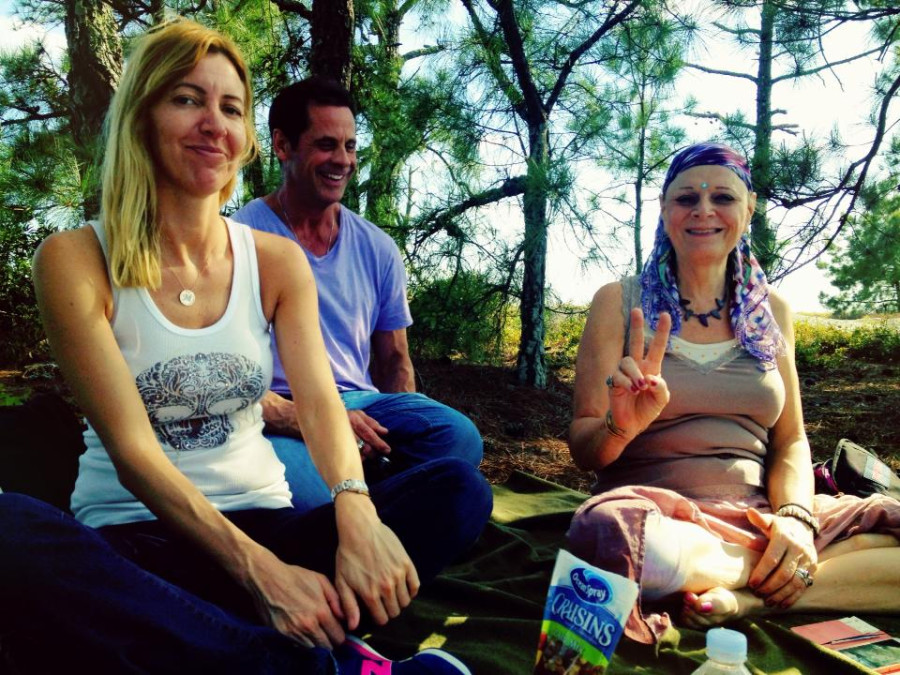 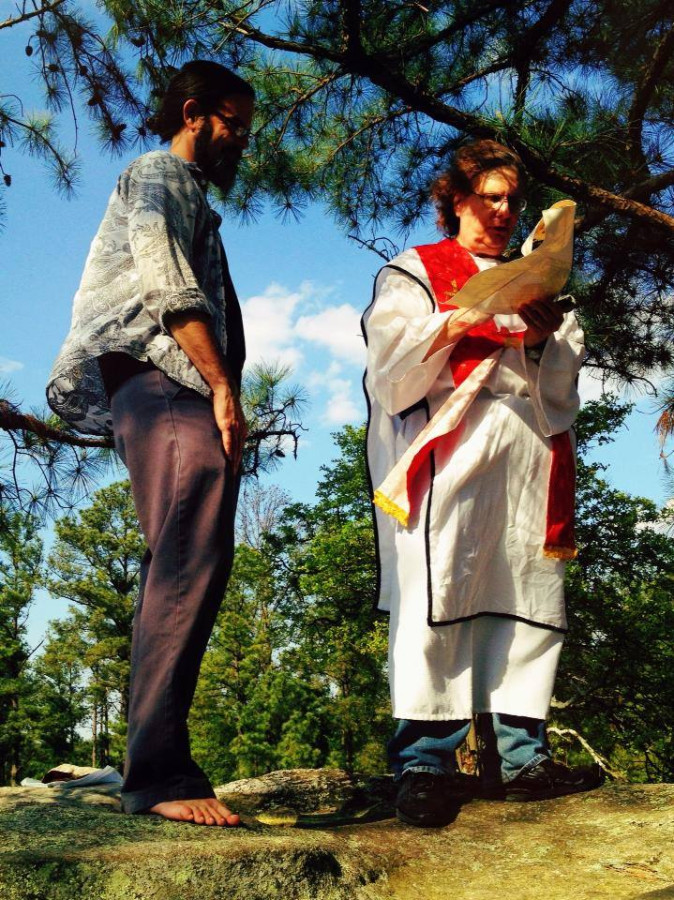 Two charters for Harrisburg PA and Berlin Germany were proclaimed and sighed and sealed!

And we held our powerful healing circle as always! 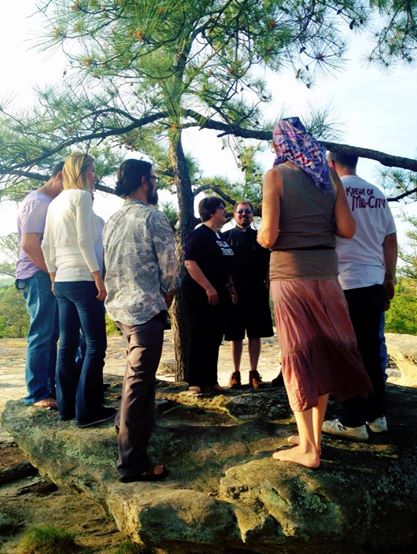 Notes on our Workings

The Great Hymn to Aten and Psalm 104

Many have pointed out the numerous similarities between the Hebrew or Aramaic hymn Psalm 104 and the Great Hymn to Aten composed by Akhenaten. Psalm 104 is attributed to the great Prophet Moses, who has also been identified as none other than Akhenaten (Akhnaten) himself.

While the sun is used as a symbol to represent God in many cultures, Aten is neither the sun nor is He the “sun god” as some have erroneously suggested.

The Scriptures use the symbol of the sun as representing God. Notice how the Psalmist describes the attributes of God:

“Who coverest thyself with light as with a garment; Who stretchest out the heavens like a curtain. Who layeth the beams of his chambers in the waters. Who maketh the clouds his chariot; Who walketh on the wings of the wind; Who maketh winds his messengers; flames of fire his ministers (Psalm 104:2,3)

It should be noted that the sun itself was not worshipped by the faithful monotheistic Egyptians or Hebrews, but it was served as a ruling deity by the polytheists among other ancient Egyptians.

FREE ILLUMINISM
1. Spiritual growth is incompatible with authoritarian structure.
2. Scientific Illuminism requires a non-dogmatic, experimental
approach.
3. A free society linked in free communion should be actualized.
4. We facilitate, we do not lead. We do the Work, we do not extract
oaths or dues, or require dogmatic beliefs.
You can make these resolutions a reality. Join us!
FREQUENTLY UPDATED LIST OF LODGES, TEMPLES, NODES - click here
Collapse