“Philip K. Dick - The most brilliant sci-fi mind on any planet!”

U.S. theatrical and digital release of Radio Free Albemuth – the feature film based on the novel by science fiction master – Philip K. Dick.

Radio Free Albemuth has been invited to screen at the prestigious Indie Night Series at Lincoln Center.  With a Q and A after the screening with Writer/Director John Alan Simon about adaptingPhilip K. Dick’s novel to the screen.

Thus far, only audiences at film festivals and special events have bren able to see RFA (Radio Free Albemuth) on the big screen - events like the Philip K. Dick Conference, the Hugo Awards at Worldcon and Science Fiction Hall of Fame induction ceremonies at the EMP Museum in Seattle and - the - Indie Night Series at Lincoln Center Film Society in New York.  Despite great reviews and enthusiastic response at screenings, traditional companies simply haven’t offered us the kind of distribution that would connect to the audience we believe is out there for Radio Free Albemuth.

Nearly all previous Philip K. Dick movies have been big budget studio-level movies – e.g.Blade Runner, Minority Report, Adjustment Bureau, Total Recall. Terrific as many of these are in their own right, writer/director John Alan Simon felt that with the exception of the animated A Scanner Darkly, none has yet captured the essence of Philip K. Dick's (PKD) slightly paranoid, darkly humorous, and above all, tender view of the human condition.

The goal set  was to make the kind of movie that readers of PKD's science-fiction would want to see.  Not just one of his incredible “high-concept” ideas reduced to a conventional action-adventure plot.

Radio Free Albemuth uniquely lends itself to this purist approach – and a special responsibility. RFA was PKD’s most autobiographical work and he places himself as a pivotal character in the story.

The central fictional aspect is one of the most important events in the author's real life – what he came to believe was actual contact with the extraterrestrial entity he termed VALIS– Vast Active Living Intelligent System.  (The Exegesis published last year is the condensed volume of PKD’s million-word journal during this period.)

We're confident there’s an audience out there for smart, thoughtful sci-fi films that don’t depend on car chases or super heroes.

In the alternate reality past of RFA, America is fast approaching a police state helmed by a Nixon-like President Fremont (Scott Wilson), now serving a fourth term in office chasing after a shadowy terrorist organization called Aramchek – that may or may not exist.

A record store clerk in Berkeley named Nick Brady (Jonathan Scarfe) begins to have visions and embarks upon a plan to overthrow the government with the help of a mysterious woman named Silvia (Alanis Morissette) and his skeptical best friend—science fiction writer Philip K. Dick himself (Shea Whigham).

RFA’s theme of the value of the individual  against the supremacy of the state remains as relevant today as when the novel was published in 1985.  Like Orwell's "1984" or Huxley's "Brave New World," PKD's "Radio Free Albemuth" has the artistic power to speak to succeeding historical circumstances and new generations.  PKD's prescience resonates today with political events as widely disparate as the Arab Spring, Wikileaks, the rise of the Tea Party and the Occupy Movement.

RFA is also a movie for people who appreciate music.  The story’s backdrop is the music business in Los Angeles. Alanis Morissette plays a lead role and performs an original song integral to the story.   The critically acclaimed singer-songwriter Robyn Hitchcock gave us nine songs and contributed to the score with the amazing piano virtuososo, composer Ralph Grierson.  Often heard on KCRW in Los Angeles –The Good Listeners also perform in the film.

Radio Free Albemuth has already been embraced by the Philip K. Dick community of fans and scholars and gotten a great review in Variety.

"In our view, the best adaptation of PKD’s work to screen by far!"

Five stars!  This film has soul! You don’t have to be a fan of Philip K. Dick or science fiction to enjoy. Don’t miss it! "

We’ll release Radio Free Albemuth theatrically across the U.S. with writer/director John Alan Simon and cast hitting as many playdates  as possible for Q&A’s and special events.

Even this kind of hand-crafted release involves signficiant costs - Theatre Bookings, Advertising, Publicity, Marketing materials, Travel.    But with a little more dedicated effort on our behalf – and your pledges – RFA will be coming soon to a reality near you!

We also plan to release on DVD, Cable, VOD, and on digital outlets like Netflix, iTunes, and Hulu.

We've carefully studied and  embraced the new paradigm of Hybrid Distribution.  We're utilizing social media to enlist the communities of PKD,  science-fiction,  indie film enthusiasts and others to participate in our theatrical release, then partner with established distribution channels for video and digital.

We’re working with collaborators like New Zealand game designer Steve Hickey and others to prepare the kind of imaginative, mind-bending interactions that the visionary work of Philip K. Dick deserves.  Plus panels on PKD and other outside-the box events to make each city’s screening a special event.

That’s where you come in.

We can’t do it without you!

And in appreciation for your generous support we have thank-you gifts like special limited signed editions of the script, props from the set, poster artwork, special parties and premieres and one-on-one meetings with the filmmakers and the composer.  Plus all backers get special access to behind-the-scenes clips with actors and deleted scenes that haven’t seen the light of day – yet!

Kickstarter is all or nothing. So if we don’t reach our goal, we get zip and you don’t get any thank you gifts or premiums. And - worst of all - you may never get to see the movie.

Together we can do something very special.

How many people can say they had a hand in bringing a PKD movie to the screen?

Join the conspiracy to bring PKD’s brilliant and subversive message of hope to audiences throughout America – and then the world! 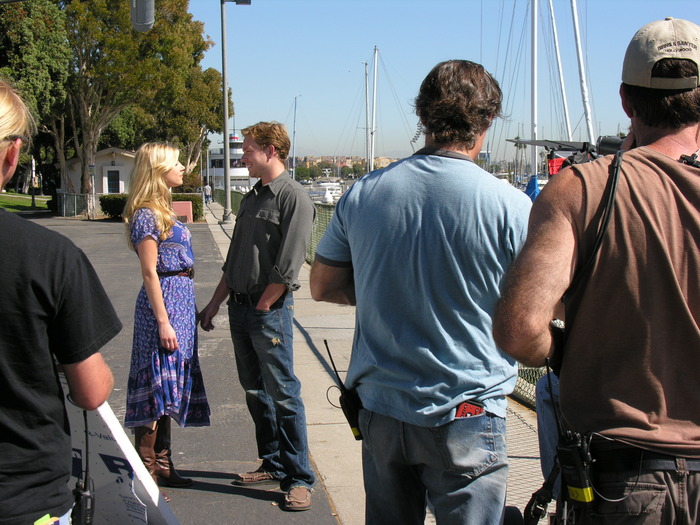 Risks and challengesLearn about accountability on Kickstarter

RFA’s great review in Variety doesn't change the current distribution landscape. This is why we have innovative collaborators on board to support a DIY Theatrical model that will help us to book key markets. The funds raised from this campaign will enable us to four wall some theatres, if necessary, to maximize publicity and exposure for our digital release. (Newspapers and magazines generally won't review or write features about films that don't open in theatres)

We are painfully aware of how expensive a typical theatrical release is currently. Just to play for a week in one theatre in New York with ads, publicity and marketing can easily cost more than what we are raising on Kickstarter. But by relying on our loyal fan base, grassroots marketing, and avoiding expensive ad buys we will stretch these funds into many more markets than just NYC. As well as to invest in placing our film onto key digital platforms. The equation is simple – more Kickstarter $$$ raised = a wider release.

Where pledges come from is also a good barometer of what cities we target for RFA's release. Kickstarter provides community involvement, as well as funds.

Without audience support for science-fiction films of intellectual substance, the filmmaking landscape will continue to be reduced to “comic-book” blockbusters, or films with miniscule budgets or independently wealthy patronage that can afford to operate at a loss.

With the passion of people like you who want to see Radio Free Albemuth, we can smash the conventional wisdom about the kinds of films that audiences want to see.

Let's get this movie into as many theatres and distributed digitally as widely as possible!