Reprinted from The Atlanta Vampire Alliance

More about the sort of undead.

Translation by Adrian of the Atlanta Vampire Alliance

Vampires
And they do exist!

Passionate, pale, undead - that's how they are known from movies. The only thing that applies to real vampires: They want our blood.

They live in small and large German cities, in Leipzig, Salzwedel, Hanau or Munich, but also everywhere else in the world. They say that they do not do well without external life energy, that they become ill. Therefore, they suck energy from victims. Psi-vampires are content to tap into the aura of their counterpart. Sanguine vampires go one step further. They fill up on blood.

To bite someone in the neck, nobody does that. The pain and the danger to transmit deadly germs are too great. Professionals therefore exchange blood with hollow needles or they scratch the donor's skin and drink directly form the source. For that they come together in scene-clubs: Black clubs is what they call their hangouts.

How vampires find their victims

Some wear pale make-up and have sharpened their fangs. The hair is long, the coats too. Others look like regular partygoers. They are all on a search for donors. Which isn't always easy. Like non-vampires, the exchange of bodily fluids is preceded by a kind of mating ritual. Even vampires require charm and charisma to play someone. And ideally an additional health certificate. Because naturally HIV and Hepatitis are a topic in the scene.

Dr. Mark Benecke is normally a criminal biologist. However, because he is sympathetic to vampires, he is also honorary "Consul of the Rhinelands" and president of the German chapter of the "Transylvanian Society of Dracula". He himself is not a fang-toothed blood sucker, but the scene trusts him. A vampire from Munich explains in Benecke's book "Vampires among us", what she finds fascinating about the blood exchange: " It is the insanely intimate. One gets something that the other person does not give to everyone and that I don't get from just anyone. Such a fusion. Part of him becomes part of me."

In the magazine you can read:
Guide: Four ways, to become a real vampire.
Download the free PDF here.  http://www.klartext-magazin.de/47b/wp-content/uploads/2009/09/Vampir.pdf

What links vampires and Christians

“We don’t want to convince anyone, that we are several hundred years old characters with supernatural powers”, explains Merticus, one of the founders of the US-American Atlanta Vampire Alliance (AVA). It is important to him that his sub-culture is being understood. But what a vampire is, even he cannot explain. “This is because that nobody knows a reason for this phenomenon. Our community is based on shared perceptions and symptoms, not on a central organizing principle.”

On the next page you can read, what psychologists and sociologists think about vampirism.

Is it a psychological disorder?

Even psychologists cannot classify modern vampires. Some speak of Renfield’s Syndrome, if patients are attracted by consuming blood (named after a figure in the novel Bram Stokers “Dracula”). Others call it fetishism, because drinking blood is sexually arousing for most vampires. Even others say, that vampirism is commonly a side effect of schizophrenia. Especially, if the affected believe, that blood imbues them with supernatural powers.

Mark Benecke is no psychologist, but as the German president of the “Transylvanian Society Of Dracula” he knows the different currents in the scene. “I would label it as a psychic anomaly not as a disorder. However, if somebody thinks, that they cannot survive without blood, then they have a obsessive-compulsive disorder.

They often suffer from depression

Merticus of the AVA has founded the company Suscitatio (Latin: “awakening”) with other vampires. Suscitatio asked around 950 self-declared vampires about their habits, their self-image, and their psychic and physical health. 17 percent declared, blood drinking vampires, 31 percent exclusively fill up on psychic energy, 52 percent name themselves hybrids, they fill up on both. Many suffer or did suffer from depression, migraines, anemia, and asthma. Almost three quarters of those surveyed claim their five senses sharper than those of non-vampires.

There are people for whom being a vampire is a lifestyle: They dress up like the bloodsuckers in the movies, play in role playing games. Many of them are in the Gothic scene. It is important for the sanguinarian and psi vampires that they are not confused with those role playing vampires. The Suscitatio study also resulted in the fact that only about a third of the real vampires declare themselves Goths.

Vampires are on the advance

Sociologist Joseph Laycock published a book in May for which he worked closely together with Merticus from the AVA. In “Vampires Today: The Truth About Modern Vampirism” Laycock compares the vampire subculture with the early gay and lesbian movement. The difference: a vampire has no “coming out”, but an “awakening”.

The studies by Laycock and Suscitatio point towards that ever more vampires “awake”. The success of Stephanie Meyers “Twilight” series seems to confirm Laycock- the subculture of the real vampires grows and is beginning to mix with popular culture. Even MTV is showing interest. “They asked me if I could imagine myself moderating a show about modern vampires”, says Laycock. Benecke comments on the trend apparently unaffected: “Eternal love, eternal passion, deep – also physical – connection: That not only appeals to girls, who are the main audience of “Twilight”, or are they?”

How do I become a vampire? A manual

Dracula and others can always be counted on for a hit movie or bestseller. “Twilight” proves that again: Bloodsuckers are popular. Cause enough to look into how you can actually become one.


Bram Stoker’s Dracula sold his soul to the devil for eternal life. The original vampire since then creates others of his kind himself. He likes women and surprises them in their sleep (1). Then he drinks them empty over several nights (2). The victim dies and is buried (3). And look at that a new bloodsucker hatches out of the grave (4). But bite does not equal bite: Men rather are transformed by Dracula into insect eating slaves.


Vampires in the series “Buffy” have it hard. First they have to find a victim (1). Which is not so easy: They can only enter houses, when invited. Spontaneous visits like Dracula are out. Then they have to drink the selected almost empty and feed them their own blood (2). Furthermore it is required, that the victim dies (3). Only then can they rise again as vampire (4). Not for bloody beginners.


“From Dusk Till Dawn” show the fastest and most simple among the methods of infection: Naturally, first you have to have a victim (1). Then a small bite is enough, doesn’t matter if in the arm or the neck (2). The transformation starts immediately, no death necessary (3). Minutes later the victim grows fashionable vampire fangs (4). No long waits, no uncomfortable over-night stay under the earth.


Even the vampires in “Twilight” can’t do anything without a victim (1). Then a small bite is enough, but self-control is necessary: don’t drain them completely (2). Only very strong willed drinkers can resist the blood thirst. During the bite they transmit a poison (3). The poison then changes the victim into a vampire (4). If a human is only been nibbled at a bit, he can be saved. For that you only have to suck out the poison. 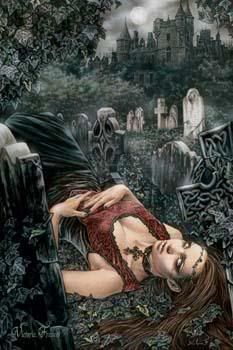 ANOTHER VIEWPOINT FROM OUR FRIEND BRAD STEIGER CLICK HERE!

As usual, Brad has demonstrated that both his knowledge and his evaluation of his subject are unsurpassed. This new volume is a fitting companion and successor to the one which was written on this topic by Montague Summers, decades ago. Brad has brought his relentless research and eye for detail to bear on this topic, and has not been shy about writing about the spiritual implications, sources, and origins of vampiric entities of all types.

In this volume, a virtual grimoire on the topic, he examines the role of spiritual intrusion, oppression, and possession in various forms, and how they all manifest in vampiric activity or manifestations. He ties age-old blood cults to modern day vampiric serial killers, and new manifestations such as the black-eyed beings, who must be "invited in" just like the vampires of lore and legend.

Brad is not afraid of the hints and explanations given to us in our earliest religions as to the origins of this phenomenon, displaying a necessary boldness that many so-called modern researchers on the paranormal, the mysterious, and the "Fortean" leave lacking in their own research, out of worries of being ridiculed or demeaned by their so-called peers. Not Brad -- He recognizes that all paranormal and spiritual matters are interlinked and interrelated, even when they seem to manifest in our own physical reality.

All serious students of vampire lore, demonology, the paranormal, and other Fortean topics should read this book. I recommend it as highly and enthusiastically as possible!

Author of Caverns, Cauldrons, and Concealed Creatures, This Tragic Earth: The Art and World of Richard Sharpe Shaver, Pulsifer: A Fable, and Land of Ice, A Velvet Knife